The issue with a lot of advice is that it’s superficially motivated, and intended to try to turn you into a social media superstar.

Pro Tip: Literally nobody likes people who got famous by social media

You’re not a social media star in waiting. Don’t try to be one. Be a real estate professional.

The issue with a lot of brand-building advice is that it’s the Digital Age equivalent of buying billboard space or handing out keychains with your picture on them. It was outdated thinking before the internet, it’s offensively obvious now that the internet is a thing.

Now that big advertising has wrapped its tentacles around all of your favorite social media platforms, and you can’t watch a cute kitty video without being sold snow tires, social media audiences are in full-on revolt against all forms of advertising.

If you’re trying to sell, or make any sort of an ask, on social media these days, you’re near the end of the viewers’ queue (and patience). You’re somewhere in their priority list between online MBA programs and pure (not from concentrate) Florida orange juice.

The fact is money alone will not save you in overcoming this monolith of objection to get people to your real estate Facebook page. An exhausted consumer is an exhausted consumer, and they need to take a break from being sold things. They just want kitty videos.

That’s why tact is not only more important in the social media age, it is the new currency in the social media age. The best non-seller wins business because – wait for it – they didn’t approach the interaction trying to sell anything while building their brand. They realized that brand-building is a marathon, and not a sprint.

However, in this metaphor, it’s not the advertiser who suffers the exhaustion. It’s the audience. The more exhausted they get, the more business you lose. Period.

Two Tickets to the Gunn Show Take the case of London, Ontario-based real estate agent with the city’s top-selling real estate team in London’s biggest brokerage, and personal branding stalwart Heather Gunn. Gunn started with the idea of Realty as a second career after a few years of freelance social media consulting and began building her brand immediately after completing her licensing. She shared some awesome tips for building an effective real estate Facebook page, which will be useful whether you made your page 2 minutes, 2 months, or 2 years ago.

Know Who You Want Your Audience To Be.

“I had a $0 budget when I started my real estate Facebook page so I had to be resourceful. I also had a fair amount of free time during the day just starting out in real estate, and I knew I wanted to use social media to help build my brand.” But before she started creating as many social media accounts as there were platforms, she asked herself one fundamental question all real estate professionals need to ask themselves.

“Who am I trying to appeal to? It’s really that simple when you start. Identify your tribe, and start to build a rapport.” says Gunn.

“London has no shortage of agents who deal in high-end listings. I wanted to work with millennials – young professionals, newlyweds, and young families – because I could not only relate to them, I could put myself in their mindset when creating messaging.” she says, adding “You need to leverage your strengths when you start building your brand. Otherwise, you’re setting yourself up for an uphill battle.”

Meet Them on Their Terms, and Have a ‘Thing’.

Starting out, her approach was simple: find ways to interact with her target audience on THEIR terms (Facebook), and create and provide content on her real estate Facebook page that was either relevant to their interests or was in some way counterintuitive/controversial. “I never shied away from who I was as a person when I started. I’m known for my sailor’s mouth and opinions, and I’ve found my clients appreciate the authenticity. I didn’t want to be gimmicky.”

But that’s not to say that she didn’t add a little unique flair. “I love drawing, so when I sold my first house I drew the buyers a picture of their house, framed it, and gave it to them as a housewarming gift. People loved it on Facebook, and that’s been my ‘thing’ ever since.” Speak to Your Strengths in Your Own Voice.

The key to Heather’s – whose social media presence led to her being recruited by her city’s top sales team after less than one year in the business – real estate Facebook page? Personality.

“Whether in blogs, in videos, in Facebook posts, I’m just being me saying what I think and feel. I’m not trying to sound like an expert on things I don’t understand.” Adding “When I started, I wasn’t trying to boil the ocean. I knew what I was good at, and I leveraged my strengths.” Obviously, not everyone is coming into reality with extensive social media experience, but that’s not to say that it’s essential to success.

Gunn attributes some of her success to her previous career, but what really made the difference for her was the time invested.

“The key when I was starting was producing content for my blog. Lots of it. The more you produce, the bigger your portfolio gets, and the better your Google rankings get.” Adding, “It’s easily shareable on your real estate Facebook page, and I found it was a great way to help people understand issues. I could just send them the link and tell them to read after our conversation; the hidden benefit as I later found out was that often they’d share with their friends and it would boost my page follower count.”

What’s even better about the process of building your brand is that its front-loaded effort. “When I started out, I was probably spending 9-10 hours a week on thinking of and producing, content. But within two months, I had my first sale from a Facebook lead. They’d already decided they wanted to go with me based on what they’d seen and read on social media.” Adding “Now, I’m embarrassed to admit that it’s been a while since my last blog post because I’ve been so busy with everything else. We’ve also been spending a lot of time learning vlogging, so keep an eye out for that!”

“Eventually you reach a point where you spend more time sorting through leads than you do writing blogs and Facebook posts.”

How’s that for ROI?

So What is Her Social Media Secret?

“Talk to people. Have discussions. Get yourself out there. I interviewed local businesses to start out, but I’d check to see if they had a strong social media presence. They’d circulate the interview and more people would see the piece.” It was using this formula she was able to build a sterling reputation as an active member of the community, and the local word-of-mouth referrals started piling up alongside the social media leads.

Building on that, she came up with the idea of running contests via her real estate Facebook page with prizes that would appeal to her target market. “Contests are amazing ways to build a following. When I was starting out, a contest for a table from a well-known local business I ran ended up netting over 700 new followers to my page, and my investment was minimal. The boost in the audience paid for the prize multiple times over.”

“But, if you’re going to run a contest, see it the whole way through. Nothing looks worse than not coming through with your end.”

As a parting thought, Gunn also points to Facebook ads as a key part of her success, but not in the way you’d expect. “Facebook ads are so helpful to gaining exposure for your real estate Facebook page, but you HAVE to do your homework first. When I was starting out, they were one of the few things I spent money on, and the return was there. But you can’t just buy blindly. Learn the system, know your audience and be patient. Building your page is a long game.”

Tying it All Together

Let’s run through the basic points of how to effectively build your personal brand using your real estate Facebook page.

These 9 simple points are all you need to start building a stronger real estate Facebook page, and to attracting more attention and growing your audience. Take it from someone who has accomplished more in her first year as a real estate professional than some would accomplish in five years! It all begins with being willing to invest time and effort into growing your brand and building your following! 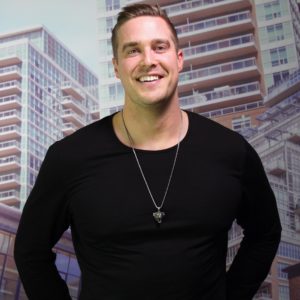 Why Messenger Bots Are Great For Real Estate Websites